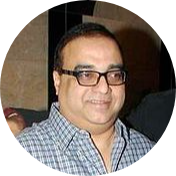 Rajkumar Santoshi is an Indian film director, producer and screenwriter of Hindi films. Having received several accolades including three National Film Awards and six Filmfare Awards, he made his directorial debut with the crime film Ghayal (1990), which won him the National Film Award for Best Popular Film Providing Wholesome Entertainment as well as the Filmfare Award for Best Director. He next directed the thrillers Damini (1993) and Ghatak: Lethal (1996). All these three financially successful films starred Sunny Deol, Amrish Puri and Meenakshi Seshadri; the second of these garnered him a second Filmfare Best Director Award and the latter fetched him the Filmfare Best Screenplay Award as well as a Filmfare Best Director Award nomination. During this period, Santoshi also received praise for directing the comedy Andaz Apna Apna (1994), which though a box office flop has attained cult status, and the major success Barsaat (1995), that marked the film debut of Bobby Deol and Twinkle Khanna. In 2000, he wrote dialogues of the film Pukar which earned him the Nargis Dutt Award for Best Feature Film on National Integration. He followed it by directing two moderate commercial successes—the biopic The Legend of Bhagat Singh (2002) and the action thriller Khakee (2004)—both of which earned him Best Director nominations at Filmfare. His highest-grossing grossing film came in 2009 with over ₹1.2 billion (US$17 million)-earning romantic comedy Ajab Prem Ki Ghazab Kahani starring Ranbir Kapoor and Katrina Kaif.

Santoshi started his career as an assistant director and worked with Govind Nihalani during the filming of Ardh Satya (1982) Santoshi made his directorial debut in 1990, with the action flick Ghayal, starring Sunny Deol and Meenakshi Sheshadri in lead roles. The film tells the story of a person in search of his missing brother and the events that follow. It was critically and commercially very successful, and earned him the Filmfare Award for Best Director, Best film, and Best screenplay. Ghayal also won the National Film Award for Best Popular Film Providing Wholesome Entertainment.Santoshi's followup was the universally acclaimed film Damini (1993), which dealt with issues like the status of women in our society and the perspective of people towards women. He won his second Filmfare best director award for it.