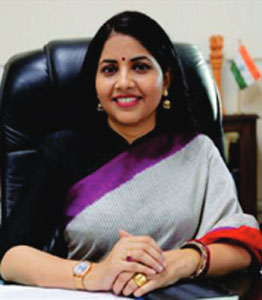 Ms. Rajshri Rai, co-founded E N Communication Pvt Ltd. and serves as its Managing Director. Ms. Rai worked for over 17 years in journalism. Starting with her first assignment at Hindustan Times she moved to NDTV as reporter, producer and anchor, virtually becoming the face of the channel. She joined Sahara in the year 2000 as correspondent. She is perhaps the only mainstream television entrepreneur who has produced shows on development and specialized subjects like law, legal aid and awareness and rural India. She has given the Indian readers India's first Legal news magazine, INDIA LEGAL and established one of the most trusted news channel in the country, Gfmi News. . Ms. Rai's contribution to Indian journalism has earned her several honors, awards and accolades and she has also written several papers on media industry and has spoken in seminars in India and abroad. The Indian Bar Association has ranked her among the top 50 personalities in India. 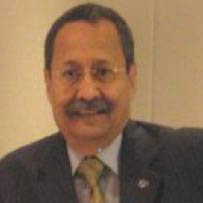 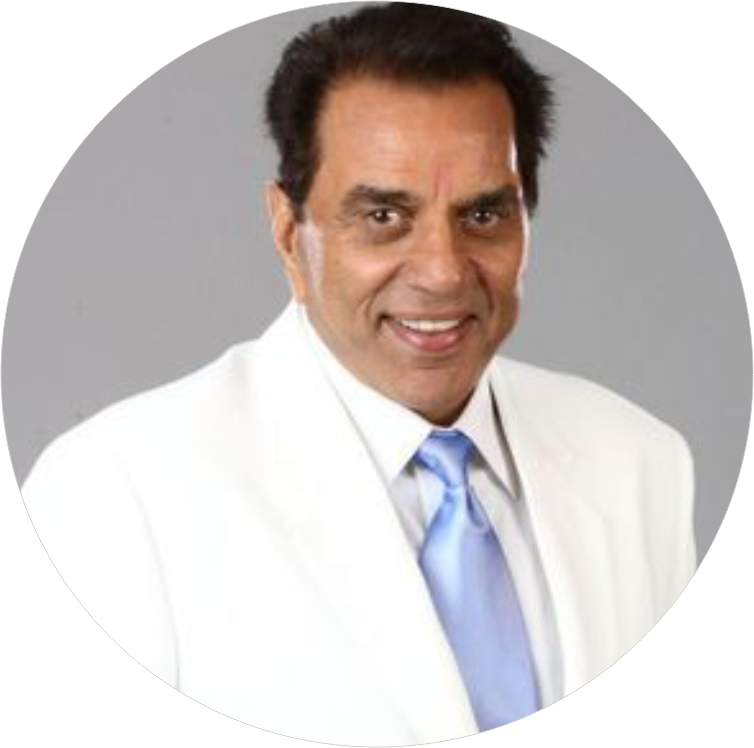 Dharam Singh Deol, is an Indian film actor, producer, and politician. In 1997, he received the Filmfare Lifetime Achievement Award for his contribution to Hindi cinema. He is one of the most successful actors in the history of Indian cinema.One of his most notable roles was in the 1975 film

Ram Gopal Bajaj is an Indian theatre director, academician, and a Hindi film actor. He has also been a faculty member and a former director of National School of Drama, New Delhi. He was awarded the Padma Shri in 2003 and Sangeet Natak Akademi Award in 1996 for his contribution to theatre 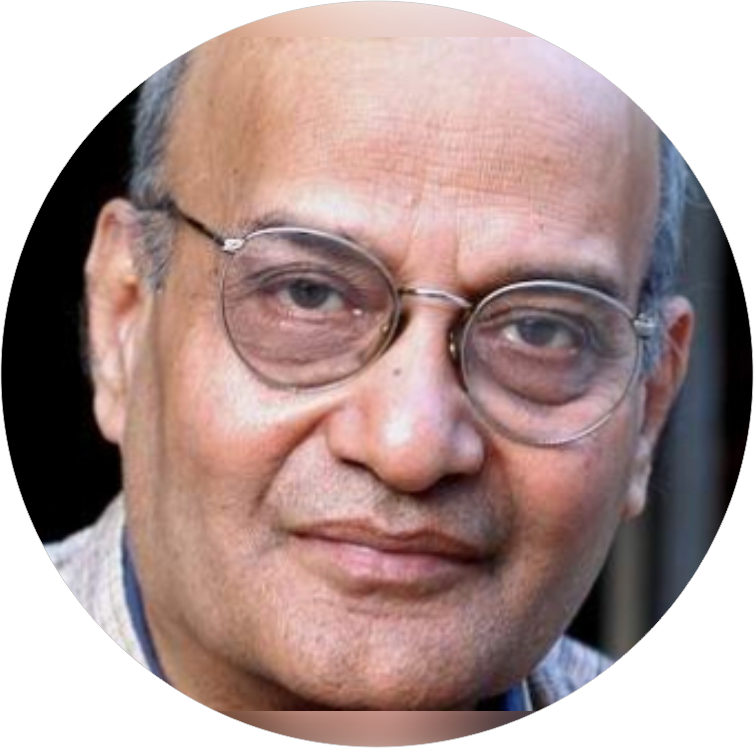 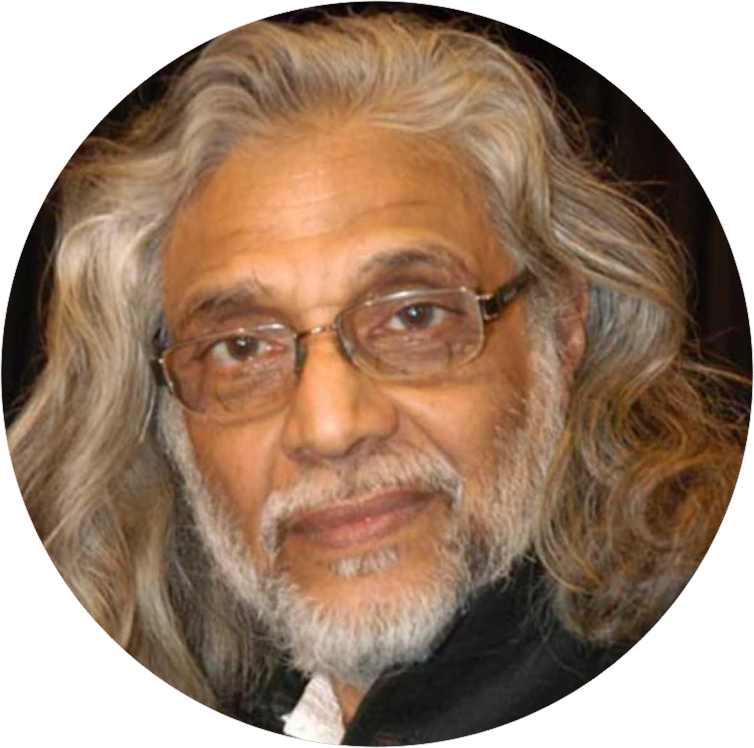 Born in 1946, Muzaffar Ali is the present Raja of Kotwara, one of the oldest living civilizations in the largest district of Awadh. He is an Indian filmmaker, fashion designer, poet, artist, music-lover, revivalist, and social worker.In 1966, Ali graduated from Aligarh Muslim University in Geology, Botany and Chemistry. He had no formal education in art or film. He began his career in an advertising agency in Calcutta. The famous poet Subhas Mukhopadhyaya opened Ali’s mind to the idea of using film as a medium of social comment and artistic expression.Ali soon moved to Mumbai to work for Air India in 1971. After 10 years, he resigned to fully devote his time to films and art. As a filmmaker, he was involved with a handful of Bollywood films. including Rekha starrer Umrao Jaan in 1981, Awadh, Congregation and Gaman in 1978. He also directed a few documentaries and short films based on Awadh, craft, culture, exploitation of women and Sufism. Ali began a movement Dwar Pe Rozi to provide employment at doorstep through craft with a special emphasis on weaving and embroidery.Furthermore, Ali’s interest in craft and clothes, motivated him to design clothes with the help of his architect wife Meera. The couture brand ‘Kotwara’, revived the traditional craft of Awadh.

He instituted the Rumi Foundation with a vision to promote Global Oneness which holds Sufi festivals including the world Sufi Music festival Jahan e Khusaru, Ali was honoured with the Padma Shri in 2005 and the Rajiv Gandhi National Sadbhavana Award in 2014.

Sharda Sinha(1 October 1952) is an Indian Maithili-language folk-singer. She also sings in Bhojpuri and Magahi languages. She is known for her Maithili version of the Chhath Puja themed song "Ho Dinanath". Sinha was awarded Padma Bhushan, India's third highest civilian award, on the eve of Republic Day, 2018. 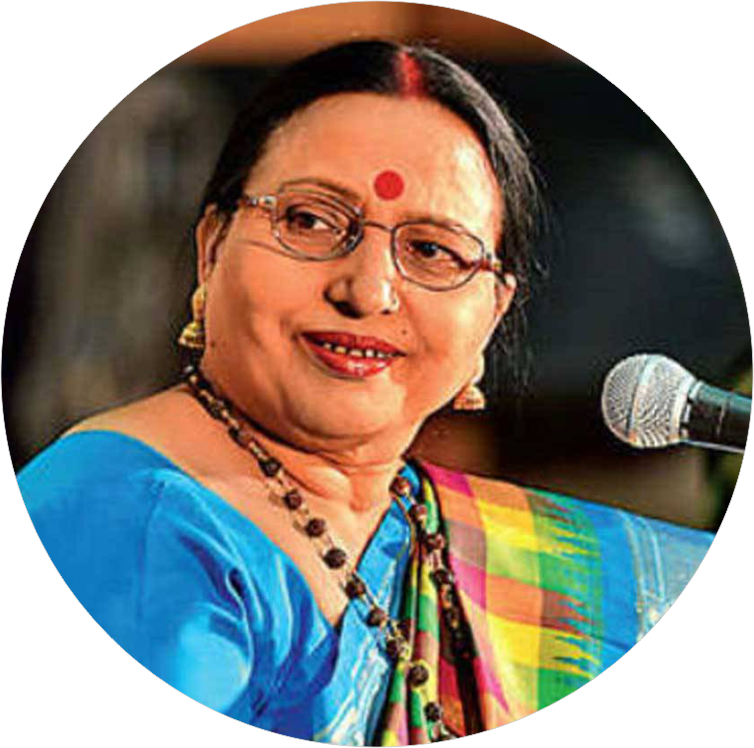 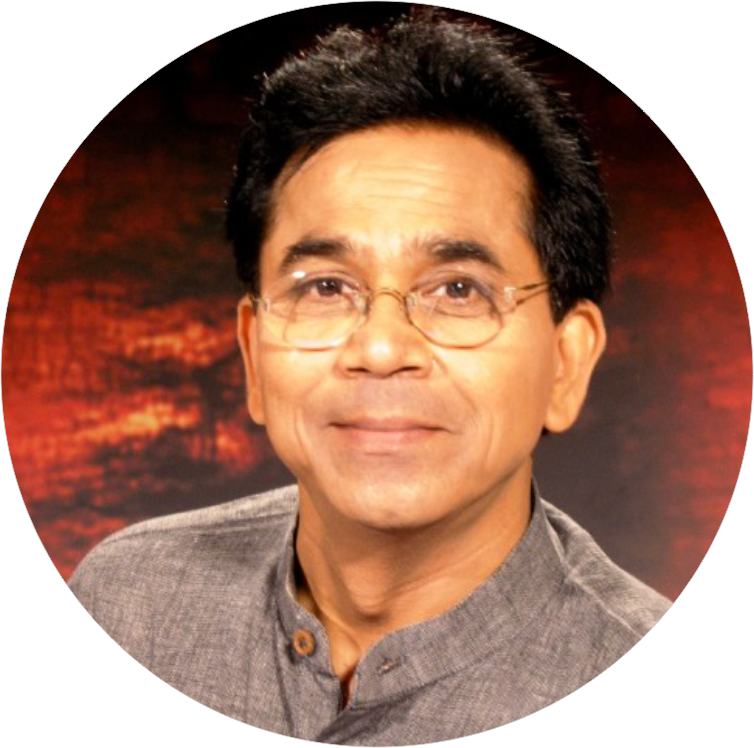 Ashok Chakradhar is an Indian author, poet and former head of the department of Hindi at Jamia Millia Islamia (Central University). After serving for 29 years, he took voluntary retirement to focus on working towards the propagation and development of the Hindi (Hindustani) language. In 2007 he became the Hindi coordinator at the Institute of Life Long Learning (ILLL) at the University of Delhi and in 2009 was appointed as the Vice-Chairman of Hindi Academy, Government of Delhi and as the Vice-Chairman of the Kendriya Hindi Shikshan Mandal, Ministry of HRD, Government of India

Vishwa Mohan Bhatt, also known as V. M. Bhatt (born 27 July 1950), is a Hindustani classical music instrumentalist who plays the Mohan veena (slide guitar) Bhatt is best known for his Grammy award winning album A Meeting by the River with Ry Cooder released on Water Lily Acoustics label. He is also known for other fusion and pan-cultural collaborations with Western artists such as Taj Mahal, Béla Fleck and Jerry Douglas. Exposure such as an appearance on the 2004 Crossroads Guitar Festival, organized by Eric Clapton, allows his playing to reach a larger audience. Guitar duet release with Guitarist Kapil Srivastava (guitarmonk founder) in the year 2016 for the composition "Merry Love Rain." Folk musician Harry Manx, who studied with Salil Bhatt for five years, plays a Mohan veena. Counting Crows' bassist Matt Malley also plays a Mohan veena and is a student and friend of Bhatt. Australian musician Lawrie Minson also learned Mohan veena from Salil. 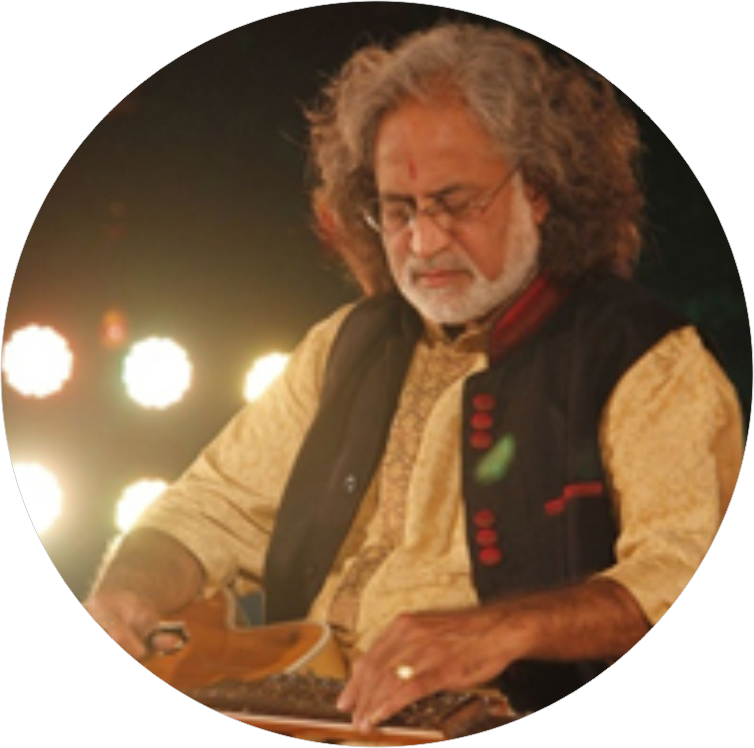 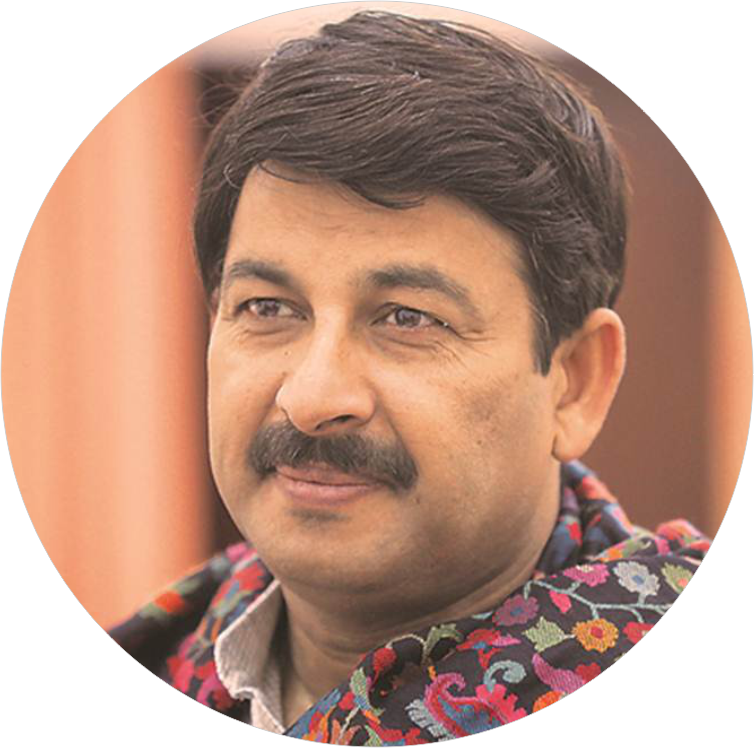 Born on 1 February 1971, Tiwari is one of the six children of Chandradev Tiwari and Lalita Devi. Coming from Atarwalia, a remote village in Bihar's Kaimur district, Tiwari holds an MPEd degree from Varanasi’s Banaras Hindu University (BHU).

Among the biggest names in the flourishing Bhojpuri cinema market, Tiwari charged as much as $90,000 per film, BBC reported in 2005. Tiwari made his political debut in 2009, contesting the Lok Sabha elections held that year from Uttar Pradesh’s Gorakhpur constituency on a Samajwadi Party ticket. He, however, lost to Yogi Adityanath.

He switched over to the BJP in 2013 and contested the 2014 Lok Sabha elections from North East Delhi. He defeated the Aam Aadmi Party’s (AAP's) Anand Kumar by a margin of 144,084 votes. Appointed the president of the BJP's Delhi unit in 2016, Tiwari led his party to a record victory in the 2017 Municipal Corporation of Delhi (MCD) election. Ahead of the 2020 Delhi Assembly election.

With nearly 30 years of experience in leadership as well as operational positions in all forms of media – from print to internet to electronic ( radio & TV), in some of the best known and respected Indian as well as international organizations, Sanjeev can quite safely be described as one of the most respected and well known media professional in the country. As a former India Editor of the BBC Hindi radio & India Correspondent of the BBC’s English outlets, he has had the rare distinction to rub shoulders both with the masses and the classes not just in India but across the world he was the first Indian to be appointed on the post which was earlier held by Sir Mark Tully. He has also been contracted by ALL LEADING news channels as a guest commentator and political analyst. 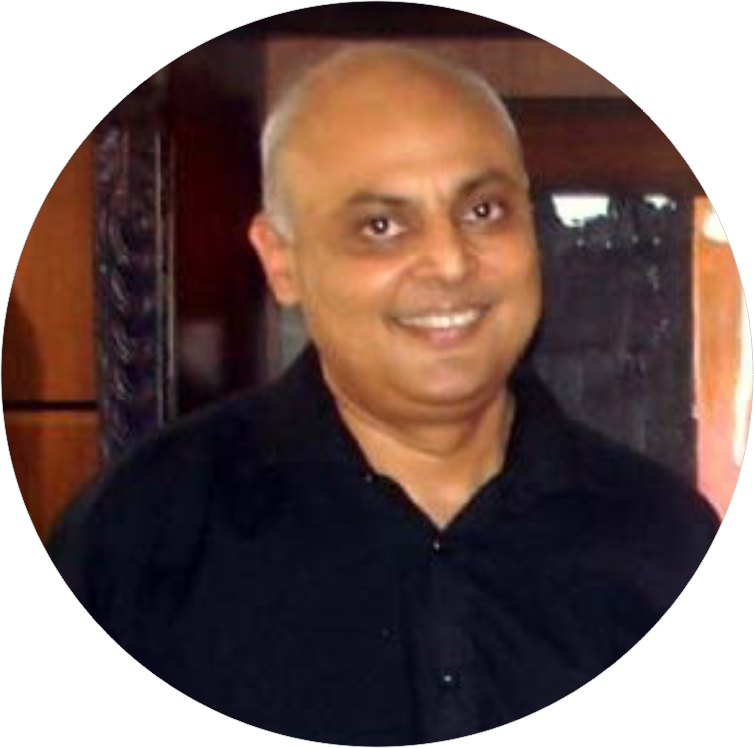