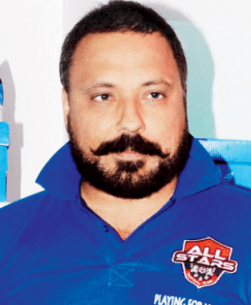 Bunty Walia is an Indian film producer who works predominately in Hindi film industry. He has produced many noted movies among which his latest release is Chowky of 2016. Besides being a producer, Bunty Walia is a philanthropist, a sports buff, and the chairman of GS Worldwide Entertainment. The producer is also the member of cine worker's association run by Maharashtra Nav Nirman Sena. Hailing from Sanawar in Himachal Pradesh Bunty Walia started his career as a film producer in 1998 with the picture Pyar Kiya Toh Darna Kya. Released on 27th March the movie stars Salman Khan and Kajol in lead roles. Directed by Salman's brother Sohail Khan, the plot of the film revolves around two lovers Suraj and Muskan and how Suraj impresses muskan's brother to win her. The movie did an average collection at the box office.

His next release was Hello Brother on 10th September 1999. Once again directed by Sohail Khan the film stars Salman Khan, his brother Arbaaz Khan, and Rani Mukherjee as lead actors. This movie was a flop. His next film Maine Dil Tujhko Diya hit the cinemas in 2002 and following it after a break of two years another picture Ek Ajnabee was released in 2005. In 2010 Bunty produced another movie titled Lamhaa which was directed by Rahul Dholakia. Released on 16 of the July the film is a thriller starring Sanjay Dutt, Bipasha Basu, and Anupam Kher as lead actors. Later again after a long break, the movie titled Chowky was released in February 2016. Bunty worked on this film along with Jaspreet Singh Walia and produced a suspense thriller which has been directed by Shekhar Ghosh.